How Our Faith Affects Our Fight for Justice 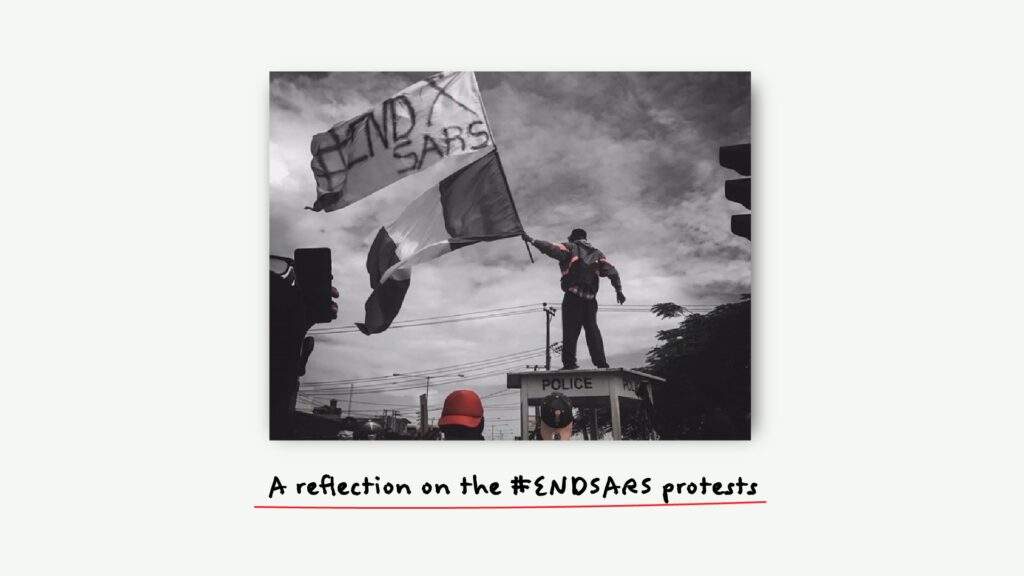 Starting in 2017 as a single hashtag but culminating into mass global demonstrations in October 2020; the world saw young Nigerians take to the streets, en masse, in protest. The beauty of the #EndSARS social movement / protest (and arguably its Achilles heel) was its decentralized nature. Nigerians across the world armed with just a smartphone and internet could organize their own demonstration in their respective locales against undue profiling, extortion, brutality, and extra-judicial killings at the hands of the Nigerian Police.

It seemed to be the most united Nigerian youths had been for a while. That period was hope personified. Unanimously, it felt good to be Nigerian. Gone was our docility masked as resilience – we wanted change and with each passing day, it felt closer than ever before.

What was remarkably louder than our demands for justice, was the deafening silence of the Nigerian Church. It appeared to be as quiet as a church mouse and equally as timid, as our homely rodent, to take a stand on this issue.

If we looked at the trees instead of the forest, we would have noticed that the Nigerian Church was divided – whilst some churches stood in solidarity with the protests; some were not so keen, and others were vehemently against it.

SO! Who was right? Who acted most like Christ in their stance? Let’s delve in.

To put it frankly, there are injustices occurring every day at any given time – on a national and even on a personal level. Hashtag after hashtag, headline after headline, message after message – we cannot seem to catch a break! As a Christian, what should our response to injustice be?

The typical gripe with wokeness and religion – Christianity in particular – is that Christianity is often seen as one of the vehicles used to perpetuate the very injustices that are being fought against. Therefore, to subscribe to a faith that continuously manufactures injustices of all kinds, must mean you are firmly asleep. Bluntly, you simply cannot bring about the change needed – you are a mere product of the sleep machine – you are (part of) the problem.

This is the paradox Christians face.

To argue that Christianity is and has not been used, albeit underhandedly, to preserve injustice would be disingenuous – there are examples throughout history where Christianity has been perverted and misapplied to propagate oppression.

However, to argue Christianity in its truest form, seeks to eternise injustice is simply unfounded. In 1982, Said Rajaie-Khorassani, the Iranian representative to the United Nations, stated that the Universal Declaration of Human Rights (UDHR) was “a secular understanding of the Judeo-Christian tradition”.

Charles Spurgeon was passionately against slavery, he opposed his contemporaries who tried to palm it off as a neccesary evil. He once said: “I do from my inmost soul detest slavery… and although I commune at the Lord’s table with men of all creeds, yet with a slave-holder I have no fellowship of any sort or kind. Whenever one has called upon me, I have considered it my duty to express my detestation of his wickedness, and I would as soon think of receiving a murderer into my church… as a man stealer”.

As Christians we are called to learn to do good; seek justice, correct oppression, bring justice to the fatherless, plead the widow’s cause (Isaiah 1:17) and we are also admonished to look not only to [our] own interests, but also to the interests of others. (Philippians 2:4). We can see that integral to Christianity is the recognition and preservation of human dignity.

Isaiah shows us that we are permitted to protest, Philippians reminds us to be considerate of others whilst doing so.

So, what does this all mean for the #EndSARS protests?

The following statements are hard realities to accept but accept them we must.

These are the others we must consider in our quest for justice. Ludicrous, right? So is dying for people that despise you.

DISCLAIMER:  Including apathetic Nigerians in the list of hard truths is not an endorsement. The reality of a thing is not the same as its morality. Basically, just because something is real, doesn’t make it automatically right or good.

There is the avenue to engage apathy and we must do so, patiently and with empathy. However, sometimes you will be met with sustained resistance – that’s just how the garri swells.

Now, to suggest a ‘considerate’ protest seems like pandering and acquiescing to oppressive systems. Honestly, in my mind, consideration and protests don’t go together. Protests are often lauded for their disruptive nature and rightfully so. It would be terribly naive to deny the power of inconvenience in drawing attention to an issue.

However, when inconvenience becomes unbearable for ‘others’ – what happens then? Remember, each one of us will fall into an ‘others’ category at some point or depending on the issue. If we are standing up to systems and governments we must strive to impact those systems whilst ensuring our fellow citizens aren’t collateral damage. The aim of protesting shouldn’t be to inadvertently punish or disregard those who can’t or won’t protest – it is to effect change.

It is near impossible to have the same level of zeal and fervour for all causes. Therefore, the charitable thing to do is to accommodate those who lack passion. If we don’t, we will either end up being exhausted, insincere, performative or worse, burnt at the stake of our own making.

Matthew 7:12 tells us whatever you wish that others would do to you, do also to them. This goes beyond reciprocity, our response to God’s grace should be to extend it to others.

Now, what I am suggesting is an herculean feat. I know. It seems crazy to me. It is crazy to me. I feel like a hypocrite because I protested. However, upon reflection, this is something worth considering. It is a delicate balancing act, but I want to make the case that it is something Christians are called to do.

We must also admit that just because people don’t fight injustice the way we want, does not mean they don’t fight at all.

Some would argue that we did employ faith and works – a few churches hosted prayer walks, some donated food and resources, others provided shelter but to what end? The protests were brutally quelled. Riots erupted. Change was negligible – if any at all. Since October 20, 2020 Nigerians have been filled with (greater?) despondency and many have kick-started, fast-tracked and executed their JAPA plans. Most feel an overwhelming sense of failure and many of us cannot muster the courage to go out and protest again.

It is maddening to see injustice, live through it, campaign vigorously and then see minimal change. This reality eats away at our hearts. It is difficult to fathom how these things can keep occurring without appropriate repercussions. This cycle feeds our, much deserved, apathy towards our country and fuels our ungratefulness towards God.

Our efforts (gospel-centred, diplomatic, and otherwise) never seem to be enough, and oppression keeps prevailing – this often makes us question the goodness and proximity of God.

2 Corinthians 1:3-4 reminds us that God is the father of compassion and the God of all comfort, who comforts us in all our troubles, so that we can comfort those in any trouble with the comfort we ourselves receive from God. Psalm 34:18 tells us God is close to the brokenhearted and saves those who are crushed in spirit.