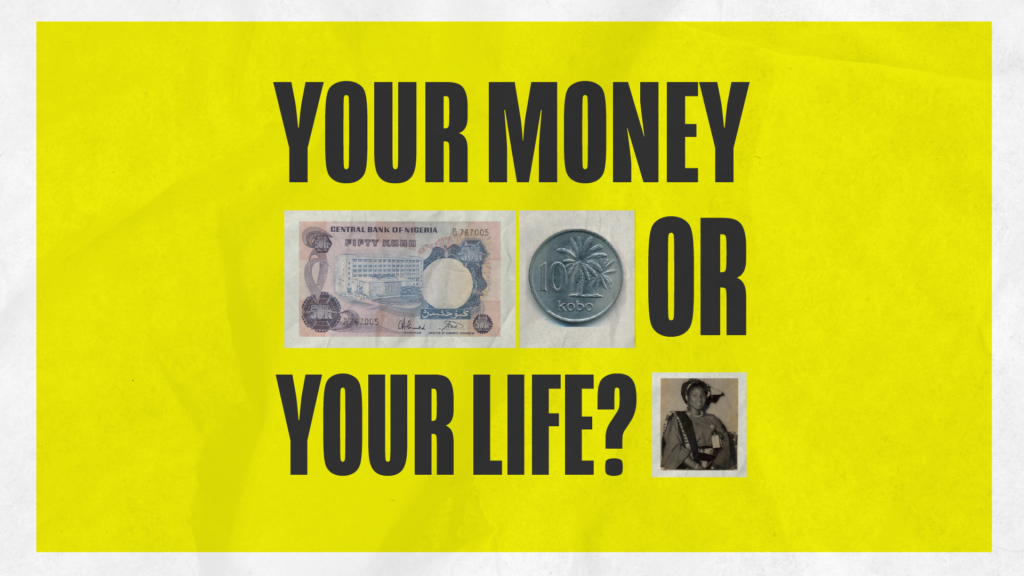 A dreadful question posed under duress by a robber to an unsuspecting victim. What a question! Would anyone in their right senses choose money over life, knowing that giving up the latter inevitably means losing the former?  What choice could there possibly be?  Well, considering that we, as humans, often choose according to our greatest inclination of the moment, a victim does actually have a choice, regardless of how sensible that is.  So, if in that split second, the thought of making it away unhurt crosses the victim’s mind, and the allure of money prevails, then the ‘unanticipated’ answer carries the day, much to the chagrin of the bandit!

The reality of our Christian life is that we’re always in some kind of tug of war – pulled by the flesh and at the same time pulled by The Spirit, the heart and the mind of the believer being the battleground. As a result of this ongoing conflict, we’re constantly having to make value judgements, some times more wisely and thoughtfully than other times. These value judgements, be they well- or ill- informed, result in the choices we make. Choices are rarely ever neutral. Rather, they spring from underlying desires that mean we prefer one thing over another at any given point in time. We may however grow accustomed to certain choices, such that over time, we instinctively choose the same thing with little or no thought.

When it comes to sin, the excuse ‘the devil made me do it’ may be true on some levels, but our desires are not totally in the clear. Every sin is an inside job!

“Nobody sins out of duty, we sin because we believe sin’s promise of pleasure” – John Piper. At that crunch time, sin is alluring and pleasurable, and so the heart gives in to the stronger desire for the flesh or the Spirit, as the Bible states:

Sometimes we’re led to believe that there’s not much correlation between our spiritual development and the pleasures we habitually either indulge in or forgo, yet the truth remains that “I do what I do because I want what I want”. Indeed, desires fuel actions, but sometimes, wanting is not enough, we need to take actions that prompt and nurture certain desires. So, almost in a cyclical manner, desires fuel actions that fuel desires.  Delight comes from significant beholding, meditating and thinking upon, the object of desire being ultimately either the world or The Word.

One of the consequences of embracing the lordship of Christ is that we are no longer at the centre of our lives. Christ is, and He gives us an identity to live from. The implication of that then is that every choice we make, however small it seems, moves us one step away from or towards honouring Christ as Lord.

Believers are, on one hand, called to actively put to death (mortify) works of the flesh, and on the other, fan to flames (vivify) a new spiritual life. These two aspects go hand in hand, and involve us consciously keeping in step with The Spirit.

Rarely does the Holy Spirit work in a one-off manner to bring about sustained spiritual growth in a believer’s life; what we see instead, in Scriptures, is a complementary interplay, where the believer has the personal responsibility to pursue holiness faithfully, carefully and earnestly. Spiritual maturity largely depends on how the gifts and resources at our disposal are put to use.

Giving in to a moment’s worth of guilt or shame may lead us to impulsively embrace new patterns of behaviours, but as we know, quick fixes aren’t always lasting. Tony Reinke in his book – 12 ways your phone is changing you – cautiously warns against quick but ineffective change; and even though his focus is on battling social media addictions, his identification of what we really need holds true across board – “new life disciplines birthed from a new set of life priorities and empowered by our new life in Jesus Christ.” In other words, our new life in Christ empowers us with new life priorities that, in turn, birth new life disciplines. Anything short of that God-given order is unlikely to yield lasting change.

Surely there’s a marked difference between a maturing Christian and one who is not, all thanks to everyday choices that slowly, but surely, morph into habits! At the risk of overgeneralising, humans are, by and large, creatures of habit, habits we have willingly cultivated or ones we’ve had imposed on us. Nevertheless, we do well to orient our choices and habits for our temporal good and even more so for our eternal good.

Sike Osinuga is a Christian woman learning the ropes of being a godly wife and mother, one wobbly step at a time. An erstwhile Telecoms Engineer, she enjoys reading good books and writing. Her passion is to know Christ and to make Him known. She blogs at http://www.thrivebytheword.com”